Jan Voshol takes a step back in the Netherlands, Wilco and Lennert at the helm

“I just keep getting myself involved in everything,” says Jan Voshol with a wink. He just explained that last year he has transferred the shares of his company in the Netherlands to son Wilco and son-in-law Lennert.

With that, both men are now officially at the helm at Voshol Warmte- en Elektrotechniek in Bleiswijk. But anyone who thinks that Jan is stopping, is wrong. “For the time being I’m not done yet, but Wilco and Lennert will come to the fore more than they already did.” 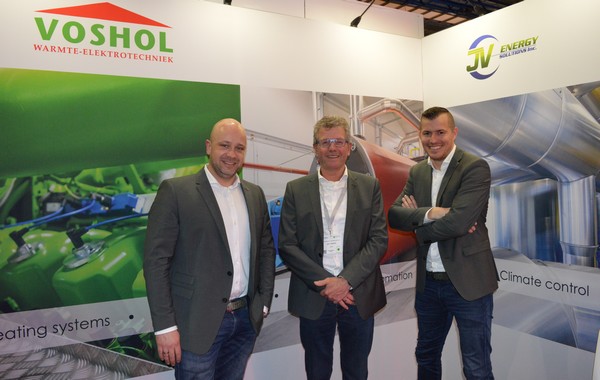 Lennert, Jan and Wilco at this year’s HortiContact

For the outside world, the business transfer may be a news item, but internally it was already known. “Seven years ago I started thinking about taking a step back,” says Jan. “I turned 64 in January, and although I am not thinking about stopping at all, I thought it important to let that process run smoothly and gradually. The share transfer was officially completed last summer.”

‘Boss’s son’
This moves the control to son Wilco Voshol and son-in-law Lennert Bredemeijer. “But it seems logical to me that my father keeps thinking alike when things have to be decided,” says Wilco. He came to work as a 13-year-old youngster in his father’s business as a holiday job. “Great to work with my hands, that’s what I still like doing. But working with my father, I didn’t want that at all.”

Yet it came to that when Wilco decided to start as an electrician. “From that moment I did not leave anymore. Of course I have been ‘put to the test’ by the staff as ‘the boss’s son’. That is part of it, but I think I survived well.”

New building
In 2005, Lennert also came on the payroll of father-in-law Jan. “Actually, from the moment we moved to the new building”, the three men reminisce. “Yes, at a certain point the old building became too small,” says Jan, who started his career in 1980 with the Van Wijk brothers. The company was one of the first to bring heat into greenhouses with, at the time, flat glass.

When the focus of the brothers shifted to commercial and industrial construction, Jan joined the greenhouse heating branch in 1995 and took over fifty percent of the shares. In 1999, that even became one hundred percent, and Voshol Warmte- en Elektrotechniek was born.

Taking the plunge
The next step, after moving to a larger building, was to cross the pond. A subsidiary was set up in Canada in 2010 with J&V Energy Solutions. Step by step the company has been expanded there. That did not happen swiftly. “In fact,” says Jan, “if I had known at the time how much effort all those other rules would cost me, I would not have done it. But doing business means taking risks and daring to take the plunge.”

In 2020 Voshol cannot do without Canada anymore, the three men acknowledge. But that also applies to almost all other Dutch horticultural technical colleagues. “Abroad is becoming increasingly important,” says Lennert, who was active in logistics before he joined Voshol.

He is now also completely at home in greenhouse horticulture, he managed the insulation department within the company and he saw up-close how many projects domestically and abroad got started. “This year again there are a number of high-tech installations for new construction projects in the Netherlands and Belgium. These involve lighting, heat recovery, cooling and ventilation with all the electrical engineering that comes with it.”

Energy transition
The company will focus on energy transition for the future. “Increasingly more alternative energy sources are being added,” Wilco points out. “In addition, it is always water that flows through the pipes, but in the meantime more and more electrical engineering is involved in those innovative techniques,” Lennert adds. “The combination of central heating, electrical and insulation, all with us under one roof, is therefore very useful and is of great importance for the continuation of the business.”

The three men look to the future with confidence, together with their, currently about 40-strong, permanent workforce and a large flexible reserve where necessary. “With that, we can continue to serve the international customer, who wants to be completely unburdened in what are increasingly turnkey projects, but also the Dutch grower, of whom we certainly will receive many calls in the winter for the well-known urgent tasks and repairs.”

This article was published in Hortidaily.com